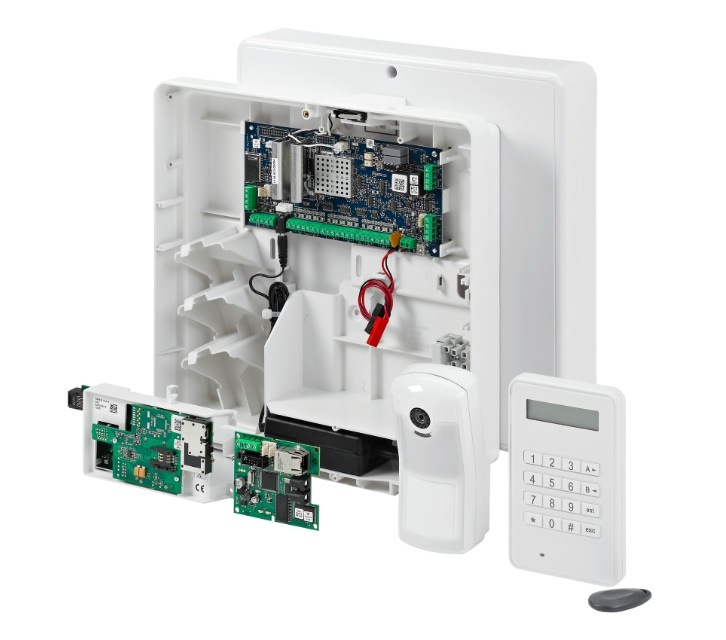 If we can integrate the alarms generated by the intrusion detection system into a VMS with which we manage our CCTV installation, the system acquires sufficient characteristics to form a good protection system.

Thanks to the plugin developed by SGSE’s R&D department, it is possible to receive alarms from Mileswell’s Galaxy Dimension intrusion centrals in Milestone. In this way, we can monitor the status of the intrusion installation from the Milestone XProtect SmartClient interface.

For this, once the plugin is installed, it will be necessary to configure the Galaxy central, indicating the model that you want to integrate into Milestone, as well as the network addressing data. Based on this information, lists will be uploaded with the possible groups, zones and exits that the plant can manage. We will have to select those elements that our panel actually contains. 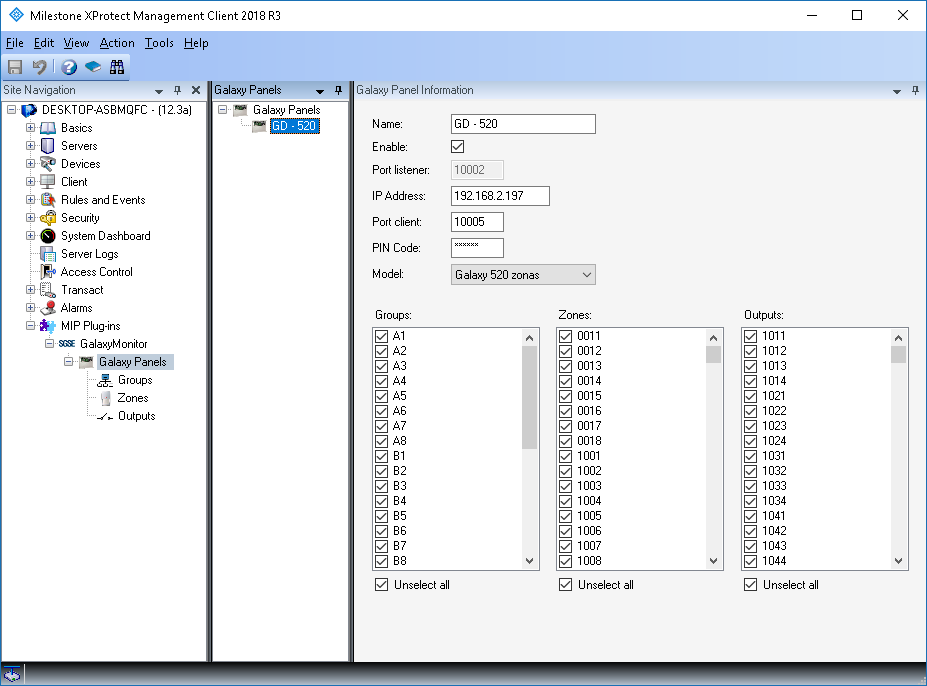 After completing the configuration, the elements associated with the panel itself and the selected groups, zones and exits will be created in Milestone. This process can take a while, depending on the number of items. When finished, it will show us a message indicating that the process has ended. 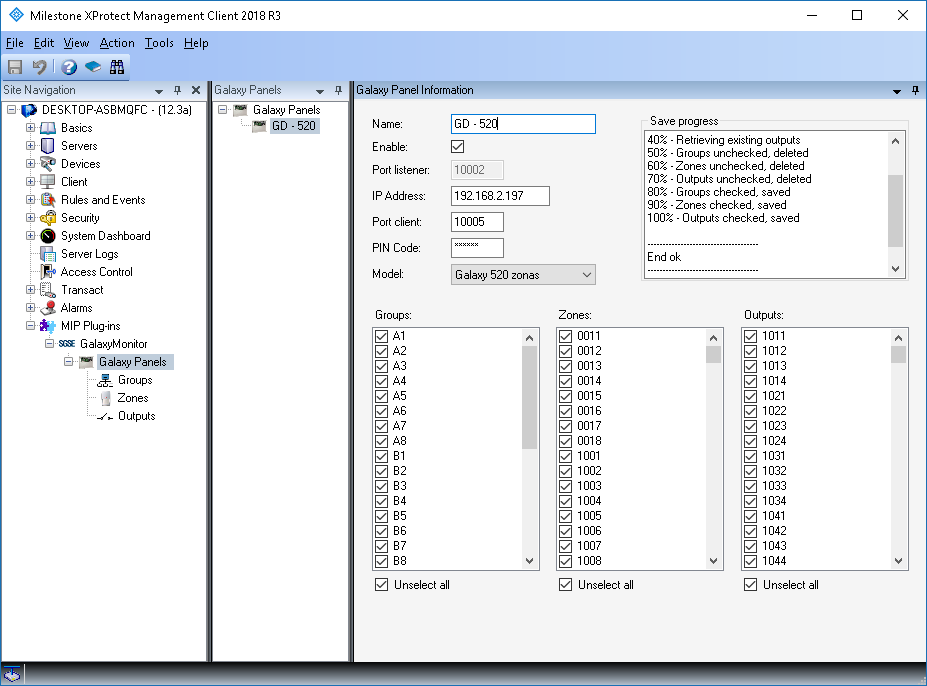 By having these elements, we can drag them onto a plane in the SmartClient, and thus visualize at the moment if an alarm associated with any of them has been received, by means of Milestone’s own flashing red circle, in addition to seeing the alarm on the alarm list. 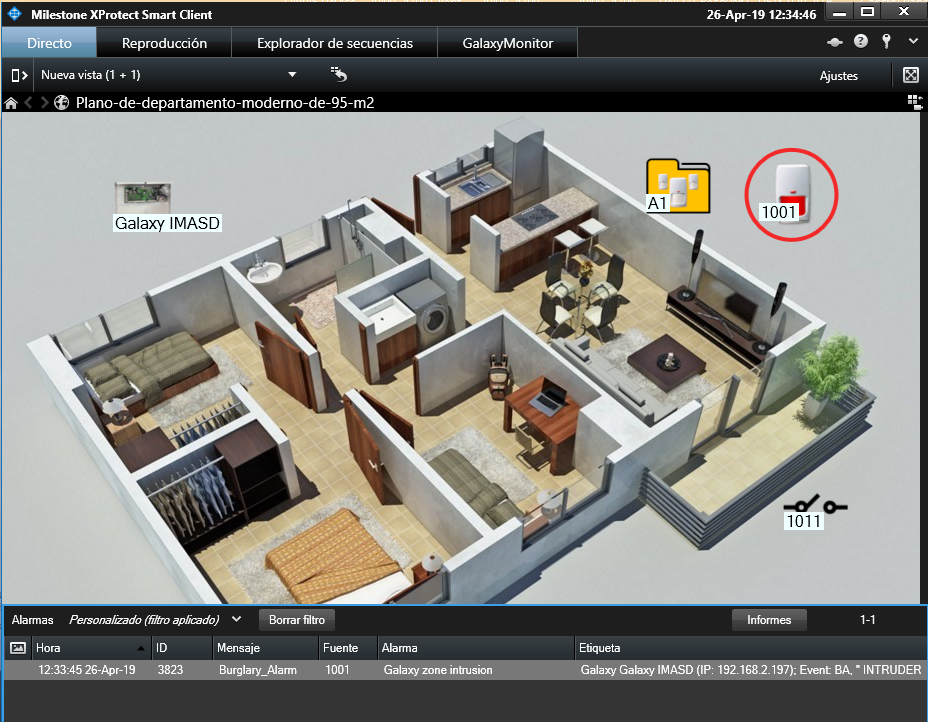 The plugin installation incorporates a new group of events in Milestone, which contains the events that can reach us from the Galaxy central through its communication protocol. For each of these events, we can select whether we want it to be considered as an alarm, thus obtaining alarms only on the events that we consider necessary. In this way, the level of customization of the solution and alarm monitoring is maximum. 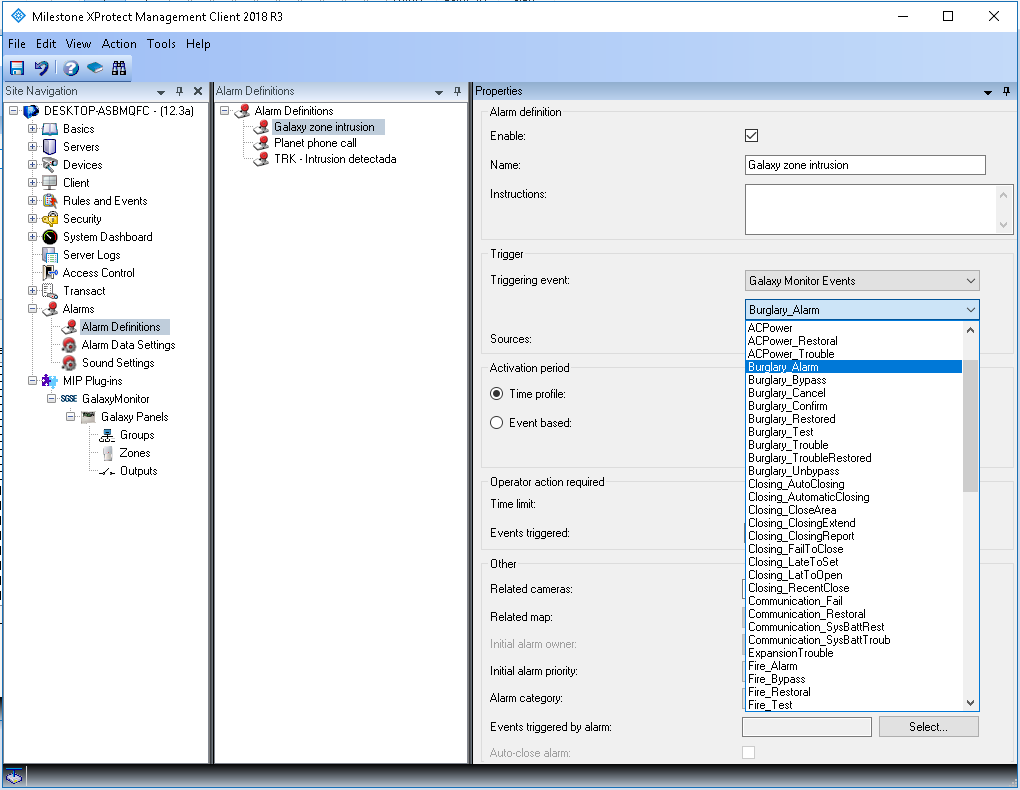 For example, we could define that burglary alarm events are considered in Milestone as alarms, regardless of the zone in which the detection was made. However, we could also define that the zone tamper event, or the power failure event, was considered alarm for a series of zones, which could be more critical, but not for the other zones.

In addition, for each of these events, we can configure Milestone rules that are triggered automatically when receiving such an event from a certain source, causing the actions configured in the rule itself to be executed without the need for the intervention of no operator. 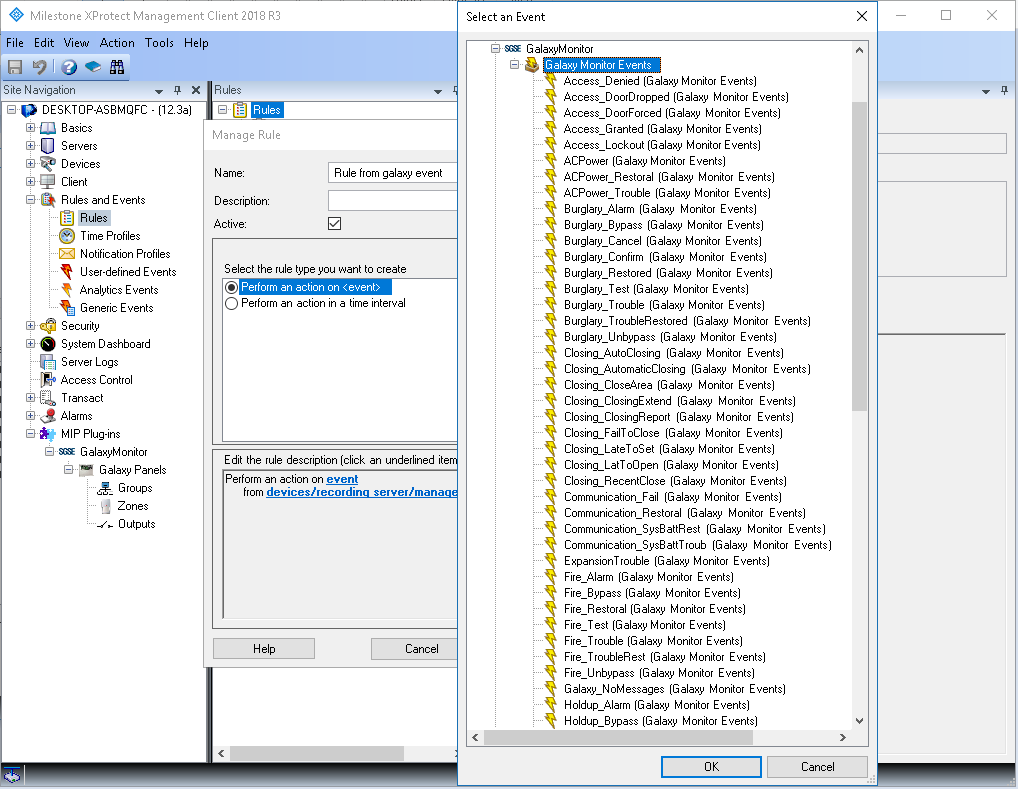 In this way, we could program rules, for example, to receive email notifications when a certain group is disarmed, or to start the recordings of a group of cameras when we receive the notification that a group has been armed, when the feeding of an area, etc.

Along with the alarm reception functionality, the plugin adds the possibility of interacting with the control panel through specific commands for each type of element.

From the plane where we have displayed the icons, we can launch the commands using the context menu of each icon. Depending on the type of element on which we right-click, the corresponding options are displayed: 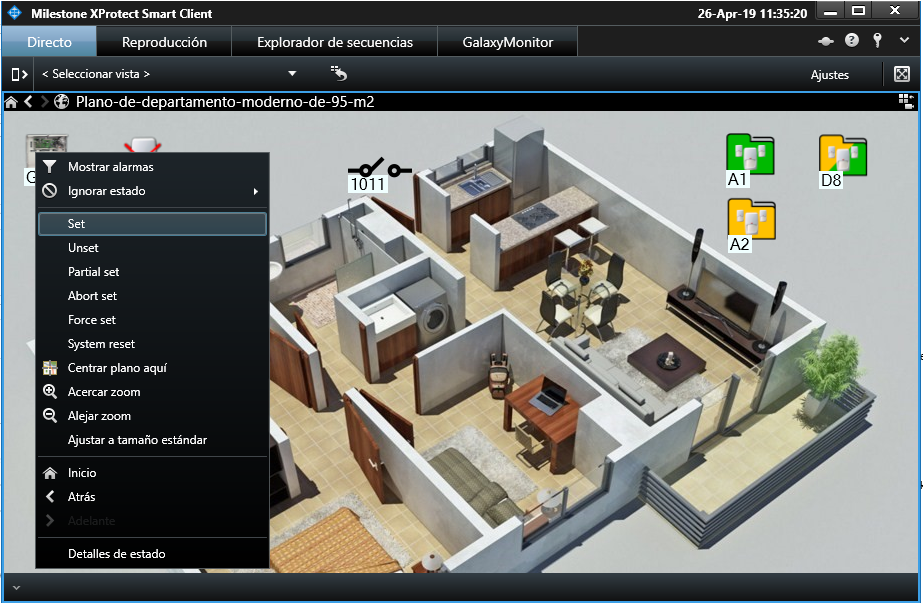 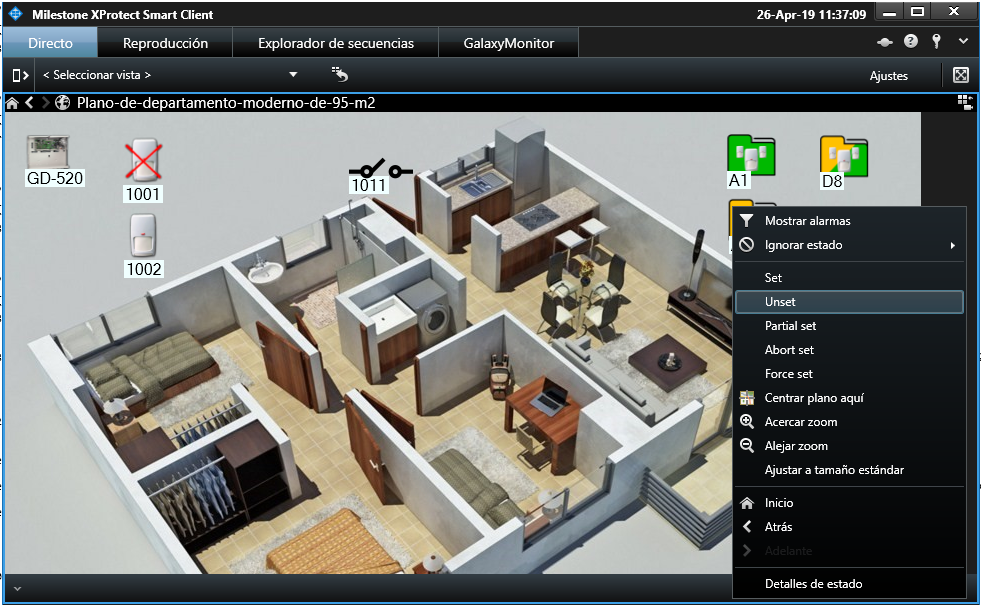 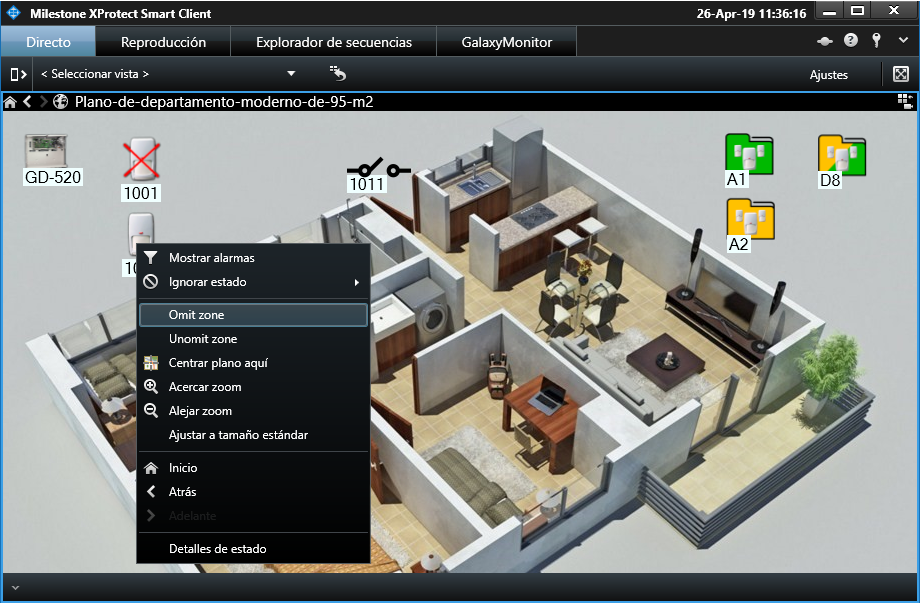 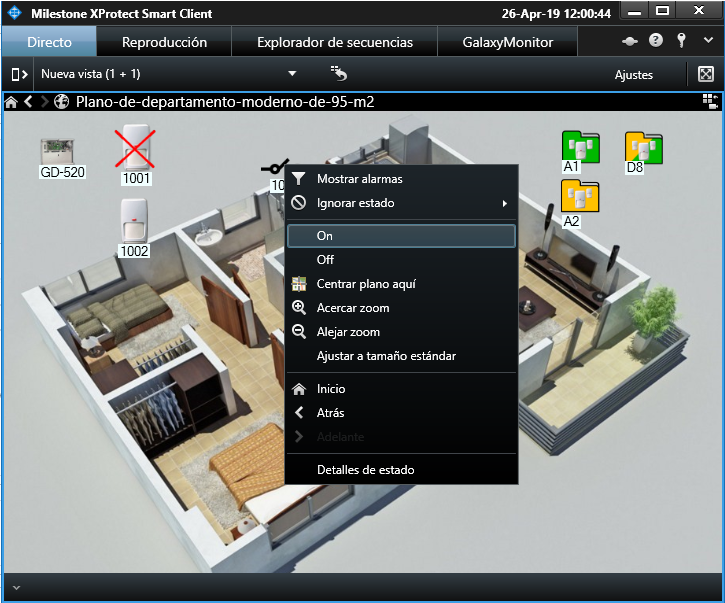 In this way, we will be able to arm and disarm the entire control panel, a group, perform a partial arming, bypass zones, restore them, activate outputs, etc. from the plane displayed on the SmartClient. In addition to the flashing red circle around items that have an active alarm, the different icons will update to indicate the item’s status, so you can quickly see if the groups are armed, unarmed, or directly armed, and if zones have been omitted or not.

The plants currently integrated are the Galaxy Dimension in its different versions:

In order to use the plugin, since the communication established between it and the panel is an IP communication, it is necessary that the control panel has the Ethernet module (E080).

If you want to be able to send commands to the Galaxy DImension control panel from the plugin and also have control from another point, such as from a CRA, the connection with it must be established by another means, such as telephone dialing (consult the manufacturer available options).

Due to the characteristics of the plugin, it is necessary to work on the Plus versions of XProtect with an alarm management module, that is: